Research: The groups research interests include the magnetic behaviour of atomic width nanowires arrays capped with noble metals, the formation of extended molecular systems on surfaces through on-surface coupling reactions to form organic/graphene nanoribbons, the electronic structure and properties of defective and pristine rutile transition metal oxide and fluoride materials, and the study activity of bimetallic catalysis for low-temperature solid oxide fuel cells.

Polarisation dependent soft x-ray absorption spectroscopies can measure either x-ray natural linear dichroism (XNLD) for alternately linearly polarised light, or x-ray magnetic circular dichroism (XMCD) for alternately circularly polarised light. The application of x-ray magnetic circular dichroism (XMCD), and the associated XMCD sum rules, to materials can probe on an element specific basis the orbital and spin components of the magnetic moment within a material. The anisotropic electronic structure or anisotropic chemical bonding revealed via XNLD can give further insight into electronic structure, and not just act as a probe of molecular orientation on surfaces, though this is its most common usage and is properly termed NEXAFS.

These x-ray spectroscopic techniques reveal detailed information about the conduction band structure, the valence band structure, the core-level structure of the material and its magnetic behaviou respectively. Further, through the use of resonant soft x-ray emission spectroscopy (RXES) either the low-energy electronic excitations can be directly probed where this is known as resonant inelastic x-ray scattering (RIXS), or site-selective probes of the valence band via XES from differing chemical species can be exploited, e.g. in organic molecules; or lastly bandstructure effects are prominent. The latter two are more adequately described as RXES rather than RIXS though the quantum mechanics make no distinction. Polarisation dependent RXES of both pure and doped transition metal oxides and fluorides, as well as from organic molecular semiconductors, are one of my principal research interests of the recent past.

Quote: “Access to the unique facilities available at each and every synchrotron facility and the awarding of experimental time at these facilities through a peer-reviewed process for our experiments represents an inward investment in Irish science, and this should be preserved. That is what I and the ISUO are in favour of and we support the ESUO in their campaign in this regard to preserve access to EU synchrotron and FEL facilities” 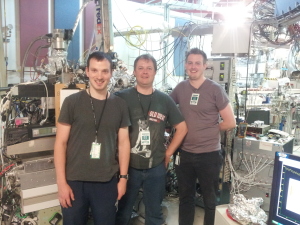 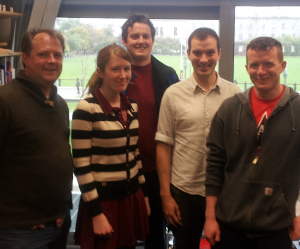