The European Synchrotron Users Organisation (ESUO) was founded in 2010, and an Irish delegate has been in attendance since the 2nd ESUO meeting in 2010.

The ESUO has in October 2014 published a manifesto in connection with a desire to lobby the European Commission with regards to a future Integrating Activity under the H2020 Research Infrastructures Work Programme call that is adequate to the needs and desires of the 25,000+ accelerator-based photon science user community of the European SR and FEL light source facilities.

The most significant publications from the organisation, in reverse chornological order, are as follows:

Since ESUO has formed, one of its objective has been to see a representative national user organisation (NUO) formed within each member country. In 2014 we are now able to number Ireland as the latest member nation represented by ESUO to now have its’ own NUO – the newly formed Irish Synchrotron Users Organisation.

Currently there are 20 active research groups in Ireland who use SR, FEL facilities as well as Neutron and Muon Beam (NB/MB) facilities. Approximately 110-120 researchers, apart from the PIs, are involved in these groups over half of whom have performed experiments at these facilities.

Towards Even Brighter European Photon Science 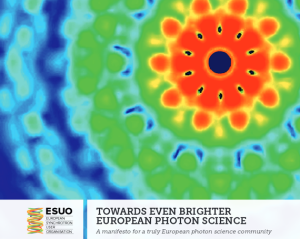 A manifesto for a truly European photon science community

See pages 8 & 9 for an example of how 18 months of Trans National Access under CALIPSO has benefitted access of Irish groups to EU SR and FEL sources. 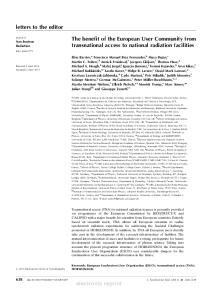 “The benefit of the European User Community from transnational access to national radiation facilities ” – an outline of how TNA has been a major benefit to scientists from European countries through CALIPSO and BioStruct-X.